When you walk on by, boys be looking like, “Damn, she fly!”
You sing to the beat, walking down the street in your new DCs (yeah)
This is how you roll, pink leg warmers outta control
It’s Hermione with a big ass ‘fro
And like Clarissa, you explain it all (yo)

It's actually Kid B who wears the DCs, but they fit in the song so I went with it

A teenager who knows everything... go figure! 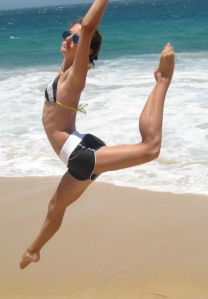 Kid A had a milestone birthday last week.  She was given the option some months ago of having either a Sweet Sixteen party or a car.  Being a very smart kid, she opted for the car.

But my mom was having none of that nonsense.  Sheepdog and I can give her a car, but she was giving her a party.  Armed with her party planning experience and a purple and silver theme, she set off like a force of nature.  I heard her exclaim on more than one occasion, “I have a vision!  Get out of my way!”

So we did, and Kid A got to celebrate turning sixteen with her friends, her family, a DJ and an awesome spread.

And apparently I have been influenced way more by Weird Al Yankovic than I care to admit.  Shout out to LMFAO and their hysterical song, “Sexy and I Know It” for the basis of my song parody.

LMFAO’s “Sexy and I Know It”

It is important that Sheepdog spend as much time with our daughters as possible, else they are more likely to become meth addicts or end up headlining at Delilah’s Den.  Without even being aware of it they are setting their own relationship standards for the future, and they are learning mainly by watching him.  So, technically, if one of them ends up grinding one-night-stands on the dance floor or is referred to as the girl who knows how to “hook a steak up,” it would be all Sheepdog’s fault.  No pressure there, right?

As I am acutely aware of this, I encourage any and all father/ daughter interaction.  Over the years they have tried many activities together.  They have done the standard dinner and a movie date many times, but it does not really allow for enough quality conversation.  They have also gone the more active route of biking and running, but those sports require that the parties be on at least similar skill levels in order for everybody to have a good time (you can’t really talk if you are constantly panting and on the verge of passing out just to keep up).  Hiking was a great alternative until the girls had to go in the woods and got all freaked out over squatting in public and wiping with leaves (they get that from their mother).  So on to other activities they went.  We are not giving up.

Recently Sheepdog has been taking Kid A out to practice driving.  I don’t care if your daughter is Danica Patrick, teaching a girl to drive is fraught with peril.  And frankly, Kid A is not exactly a natural behind the wheel.  She and Sheepdog did not do well together in an enclosed vehicle, especially after he yelled at her (in his defense, she almost ran over two pedestrians).  After I went out to practice with her a few times (promising myself that I would not raise my voice or clench or cry while sitting in the passenger seat, so as to not derail her already wavering confidence), I was so scared that I actually called the local driving school anonymously.

Instructor:  “Good afternoon, Johns Creek Driving School.  How may I help you?”
Me:  “Hi.  I am not going to tell you my name on purpose.  My kid has been practicing her driving for a while now and she is still really bad.  I mean REALLY bad.  Just awful.  I don’t even want to let her out of the neighborhood yet.  Actually, I don’t want to let her out of our driveway.  She took your class this summer and she only has three months in which to complete her six hours of behind the wheel.  I don’t think that’s gonna happen.  What should I do?”
Instructor:  “It is okay, ma’am.  This actually happens a lot.  We can certainly give you an extension.  But maybe you should have her start her behind the wheel lessons and let one of our qualified instructors work with her.”
Me:  “You don’t understand.  I would feel responsible if she hurt someone or crashed one of your cars.  And I feel fairly certain that would happen.”
Instructor:  “It’s really okay, ma’am.  The instructors have brake and gas pedals and they have no problem taking the wheel if need be.  I’m sure she’ll be fine.”
Me:  “I don’t care if Jesus takes the wheel.  This kid is high risk.”

Sheepdog decided he was going to try again to teach our daughter to drive.  He figured that he should get her driving in a more relaxed atmosphere, so he took Kid A and Kid C (Kid B was at dinner with her soccer team) to the Andretti Speed Lab in Roswell.  This place is as cool as the name implies.  They have rock climbing, video games, a ropes course, pool tables, bowling, basketball, a comedy club, and the main attraction – extreme SuperKarts, complete with 9 hp Honda GX-270 engines in them.  And it was a twofer in that he got to spend some quality daddy/ daughter time together with the girls. 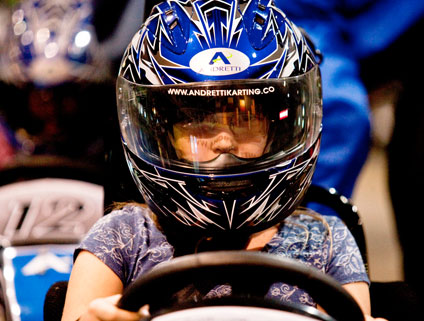 Is it too much to ask Kid A to wear this while driving a regular car too? Cause I'm certainly gonna be wearing one in the passenger seat.

Round and round the track they went.  Sheepdog had a blast.  Kid C didn’t drive by herself because she was afraid at first, but she and Sheepdog have another date planned there so she can learn to drive soon.  Kid A apparently acquired some decent driving skills on the track, although she still has a way to go before we release her on GA-400.  All in all, it was a great plan.  Way to go Sheepdog!

On the drive home the girls were pestering Sheepdog to bond with them some more.

“Tell us a story,” they begged.  “Tell us a story like mommy does.”
“I don’t know any stories,” answered Sheepdog.
“Tell us about your first girlfriend, ” prompted Kid A.
“Well… define ‘first girlfriend.’  Do you mean the first girl I took on a real date or the first girl I made out with or what?”
Always looking for the more salacious details, both girls responded, “The first girl you made out with!”
Sheepdog though for a minute.  Then he began, “I don’t remember the details, but I guess I was in fifth or sixth grade…”
From the backseat Kid C (who is in fifth grade herself) yelled, “Well, I’m certainly not ready for THAT!”

I don’t know if Sheepdog is going in the right direction with this whole father/ daughter bonding thing.  He may need a little more coaching first.