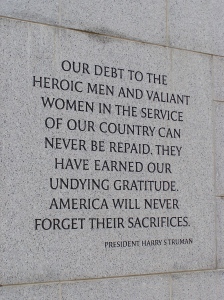 The town I grew up in holds the best small town Memorial Day parade.  Even after I moved a few towns over and had my own family, I still took them back to Absecon every year for the wonderful experience that is their Memorial Day parade.  They traditionally start at the American Legion Post 28 and work their way down New Jersey Avenue, then they turn onto Route 9 and head up to Veterans Memorial Park.  The American Legion and the Veterans of Foreign Wars Post 9462 then hold a Memorial Service in the park.  It is thoughtful and reverent and a wonderful tribute year after year.  The park is filled with veterans and their families and friends.  Generations gather together to pay tribute and remember those who have served our country.  They deliver speeches filled with words like bravery, sacrifice, heroes, honor and patriotism.  They end the tribute every year with a gun salute.  It always moves me and makes me proud to be even a little part of it.

My uncle, Lance Corporal Gary Fredrick Paarz, H CO, 2ND BN, 7TH MARINES, 1ST MARDIV, III MAF, was one of the many who died during his service to our country during the Vietnam War.  Because he also grew up in Absecon, his name is on the memorial in Veterans Park.  He was my dad’s older brother by less than sixteen months.  I never met my Uncle Gary (he died before I was born), but I have heard many stories about him over the years.  He was fun and funny and full of life.  I can’t imagine losing a child or a sibling, but I do know that his family is so proud of his service.

Another source of pride for me is that I get watch my grandfather, Henry Singleton Speed, Torpedoman Second Class, who served in the U.S. Navy during World War II, march in the parade.  Actually, he’s in his eighties now, so it is more like he rides in a classic military vehicle or a convertible, but he is in the parade nonetheless.  Afterwards, we go with him to the V.F.W., where he previously served 15 years as Quartermaster, to hang out and eat barbecue.  He served for almost four years on two ships… a DE-181 and a DD-808 everywhere from the Atlantic Ocean (both North and South) to the Pacific Ocean.  His family is also very proud of his service.

There are so many people who have similar stories… those who have served and those who are serving, those who have died in battle and those who now carry the title of veterans.  We owe them all our gratitude for their bravery.  It is on this day that we gather each year and stop to remember those who chose a path that can be difficult and dangerous and certainly requires sacrifice by them and their families.  And to them all we should give respect and thanks.

Oliver Wendell Holmes, Jr. gave a speech on Memorial Day 1884 in Keene, New Hampshire, to the Grand Army of the Republic in which he said, “I heard a young man ask why people still kept up Memorial Day, and it set me thinking of the answer. Not the answer that you and I should give to each other-not the expression of those feelings that, so long as you live, will make this day sacred to memories of love and grief and heroic youth–but an answer which should command the assent of those who do not share our memories…But Memorial Day may and ought to have a meaning also for those who do not share our memories.”

He continued, “So to the indifferent inquirer who asks why Memorial Day is still kept up we may answer, it celebrates and solemnly reaffirms from year to year a national act of enthusiasm and faith. It embodies in the most impressive form our belief that to act with enthusiasm and faith is the condition of acting greatly. To fight out a war, you must believe something and want something with all your might. So must you do to carry anything else to an end worth reaching. More than that, you must be willing to commit yourself to a course, perhaps a long and hard one, without being able to foresee exactly where you will come out. All that is required of you is that you should go somewhither as hard as ever you can. The rest belongs to fate. One may fall-at the beginning of the charge or at the top of the earthworks; but in no other way can he reach the rewards of victory.”

So please take time to remember all of the service men and women today, as well as their families.  Thank and shake the hands of the ones you see and pray for those you don’t.  And in their honor, believe in something and want it with all your might.  “So must you do to carry anything else to an end worth reaching.”