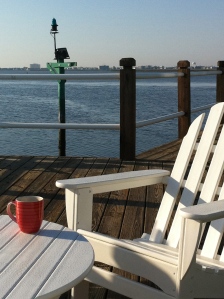 Mornings, "Mother's Day, Run Away" style. I'll never tell what is in my mug.

I also considered calling this post “Payback is a Female Dog,” but enough about animals already.  If you read Friday’s post, you would be aware that I have gone out of town every Mother’s Day weekend for four years now.  My weekend is filled with a whole lot of nothing but reading, sleeping, and pondering the wonderment of life.  I am actually still pondering right now.

Yesterday was Mother’s Day.  I awoke on my own, had a great cup of coffee while watching boats go in and out of the marina, leisurely read the paper (Shout Out!  The Press of Atlantic City), and went to a fantastic Mother’s Day service at the church in which Sheepdog and I were married (Shout Out!  Rev. Ron Watts).  Then I came back and fell asleep on the deck for over an hour.  It was a fantastic day.

After a simple veggie burger and tomato lunch I decided to check in with the real world and read some emails.  Sheepdog always says that he is never quite sure that I will return from one of these trips (and rightfully so), so he is careful not to call me too often, leave too many messages, or generally bug the crap out of me.  See – I told you that Sheepdog is a very smart guy.  Yet on Mother’s Day, in a very uncharacteristic twist, this is the email that Sheepdog sent me. 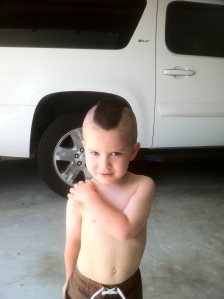