It is no secret that I think most holidays are contrived by the powers that be to boost the economy through the sale of needless crap that does not actually mean that a person loves you.  There is most likely a Kay Jewelers in every mall in hell.  Gifts do not equal love.

Say that in your head one more time because it is important.  Gifts do not equal love.

I will, however, make an exception to my rant to allow sarcastic valentines to squeak in.  I can definitely get on board with these.  I might even go so far as to say that these valentines would count as a little bit of love.  May I suggest a few that should be sent from my family? 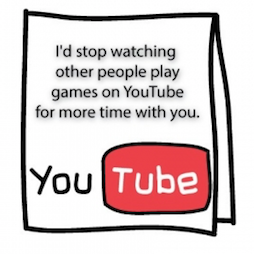 A few weeks back I went online and purchased tickets to a predicted train wreck of a movie for Sheepdog and I to see this Valentine’s weekend.  The very popular book series that inspired said film had proven to be a key ingredient to a very memorable vacation for us a few years back in Cabo San Lucas.  Given that we are not going on that trip to Mexico this year, and the fact that Sheepdog tethers himself to the thought of that week as if it were an actual life source, I figured I would throw him a bone(r).  Mr. Grey will see you now.

And then I thought it would be nice to invite my sisters and their husbands to the theater as well.  So I texted them about it.

Between happily married, consenting adults, that is.

Wish me luck for tomorrow.  Sheepdog’s not going to need any.  He’s got 50 Shades of Lucky coming his way.

The question has always stumped me.  I have never come up with a really good answer.  My whole life, I have always been flummoxed when someone puts me to the task of explaining my family traditions or heritage-related stuff.  I guess it is because I wasn’t really raised in any kind of specific, culturally rich atmosphere.

We only spoke one language in my house.  I didn’t have a crazy grandmother always yelling things in Greek or Italian or Chinese at me.  Don’t get me wrong.  I definitely had a crazy grandmother.  It’s just that she yelled, “Dammit!  Who hid my cigarettes again?” and “Don’t be a beer counter, you little jerk!” in English.  Nobody came to America on a boat or was smuggled in a truck (or even flew here on a plane for that matter) for at least a few generations back.  We definitely didn’t celebrate any holidays that weren’t pre-marked in red or depicted in the monthly picture on the linen hand towel calendar in the kitchen.

If Snoopy and Woodstock were slinging back sunflowers instead of margaritas, how were we supposed to know to celebrate Cinco de Mayo?

There was always talk that my father’s side of the family was German along with some other Western European sprinkles (French, English) and my mother’s side was similar, minus the German, and somehow plus some Native American.  I think that my ancestors have lived on American soil for a really long time, but honestly I’ve never actually entered my credit card information on ancestry.com to confirm or find out otherwise.  I don’t know what is true and what is made up.  I have always just considered myself kind of a cultural mutt.  And I am okay with that.

Until Thanksgiving, that is.

‘Tis the season for unveiling your cultural relevance and family traditions.  The friends with whom we will be celebrating Thanksgiving asked how we could incorporate ours with theirs.  This year my parents and two of my sisters and their families are going on a cruise in the Carribbean.  I was just going to watch football and make stuffing from the box, so… um, just run with yours.  Most of my kids are working on homework assignments and projects that involve where they came from and how we as a family celebrate that.  I think that the kids are as frustrated about the family void when it comes to this subject as I was, so they are finally employing some creative license to get the job done.

Kid B was given the assignment by her Spanish teacher to make and explain a traditional, cultural recipe as it applies to her family.  She asked if she could instead make an old, family dessert recipe* that would represent our heritage, even though it had nothing to do with us maybe being slightly German-English-French-1/16th Cherokee.  The teacher said go for it. 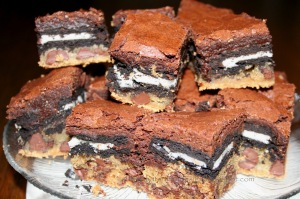 According to ancient family lore, you can make them even sluttier by adding a layer of dulce de lece before the brownies.

So now I guess, traditionally speaking, I can finally say we have a cultural identity.  And I am okay with that, although I do hope it translates to something a little nicer in Spanish.

Yesterday was the first day of April, or as I would rather call it, March 32nd.  I am not really a big fan of the pranks and jokes and general tomfoolery that accompany this particular calendar day.  I never remember that it is April Fool’s until it is too late and by then I have fallen for a handful of pranks completely, thus becoming a literal fool (archaic: a person who is duped).  Or, I see right through people’s trickeration and have to pretend.  So, nope.  I’m not really a fan.

But my kids are a whole different story.

A few years ago Kid B contributed to this blog by posting about her favorite pastime… pranking her siblings (Kid B Uses Her Powers For Evil).  Kid C, Kid D, and Kid E seem to have gone the way of Wazaah, so they spent a good part of yesterday afternoon hiding each other’s shoes and pillows.  It was all very harmless and funny and made everybody giggle.  Even I couldn’t keep my icy heart from melting each and every time I heard Kid D yell out “APRIL FOOL’S!” followed by a giant guffaw.  He was on a roll by dinnertime.

Sheepdog had ridden his bike to work yesterday, so he came in through the basement workshop and not the kitchen door when he got home last night.  He showered first and then joined us for dinner.  When he came upstairs, he had the remnants of panic smeared across his face.  Then he greeted us with, “Are you TRYING to kill me?”

Apparently, the pranksters got to him too.

This shit is just not funny.