Kid D really got into reading the Wimpy Kid book series by Jeff Kinney this summer.  We borrowed the movies and watched both DVDs a few weeks ago.  He really thinks they are funny, so I decided to get him the Do-It-Yourself Book, which is a kind of fill-in-the-blank diary for boys (so they clarify many, many times that it is indeed NOT a diary because that would be too girly).

He has been so cute to watch every night, reading and writing in his book.  He takes it very seriously.  Sometimes I hear him talking to himself, either reading aloud or working out an answer to a prompt in the book.  Every once in a while he will ask me questions, like “What’s the longest I’ve ever gone without bathing?” or “Have I ever been sent home early by one of my friend’s parents?”  When I ask why he wants to know he just guards his book and holds it close to his body and says, “Oh, no reason.”

So I felt very special last night when he invited me to read some of his journal (it is apparently much manlier to call it that) with him.  I crawled into his bed next to him and he showed me some pages and read me a questionnaire and the answers he chose.  Now, it was really for classmates but he chose to answer with family members instead.  I have to say that his answers were spot on.

The person who’d have the best chance of surviving in the wild:  Dad (Sheepdog)

The person you’d want to do your homework for you:  Kid A

The person who doesn’t have a “whispering voice”:  Kid E

The person who you wished lived in your neighborhood:  his cousin W

The person who’s most likely to do something crazy on a dare:  Kid C

The person who you really wouldn’t want to get hold of this book:  Kid B

The person who you wouldn’t want to get in a fist fight with:  Mom

So the rest of the man-journal had some cute and often funny answers.  That is until we got to the “Predict Your Future” page… 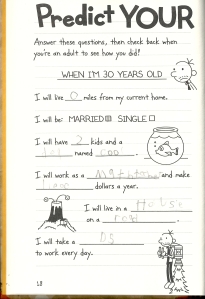 In case it is too small to read I will tell you what Kid D predicts is going to happen.  My 30-year-old married son, who is the father of two with a dog whom he calls “Cool,” will be working as a math “techer” (thank goodness he doesn’t want to be a spelling teacher, right?) and pulling down either one or 11 G’s a year (I can’t tell which, but they both suck and he’s below the poverty line either way), is still playing video games on a regular basis (enough that he brings them to work with him) and he will be living in the house he currently resides in.

Now, the way I see it, either Sheepdog and I are dead and he has inherited this house (I don’t know how he landed it over his four siblings, but whatever…) or he plans to live at home with us forever.

See, I love, love, love my kids.  I enjoy their company and I like doing things with them.  I think that they are interesting and funny and silly.  I like being their mom and I couldn’t ask for a more rewarding job than to teach them and guide them and raise them.  Until they graduate from school and – pay attention because this is the really important part – move out of our house.

And I do not think that it is too early to let them know what our expectations are either.  So in no uncertain terms I told six-year-old Kid D that he will graduate high school, then most likely go on to college, then he will promptly get a job that will pay enough to support him (and Cool and the Gang if that’s how he’s really gonna play it) in his own place.

I made sure to let him know that I will welcome him back for holidays and visits and he could even maybe live several miles away (no less than 2.5) and can come over for Sunday dinners, but he will never, ever be allowed to live here.  That would definitely lead to a fist fight with mom, and we know how he feels about that.

Wish me luck for the weekend…

P.S.  Despite the fact that I just told Kid D that I will – at some point in the future – no longer let him live with me, he wanted me to let everyone know that he did in fact give me his permission to share the contents of his journal for purposes of this post.  So I’m not really a jerk for sharing his private thoughts and feelings with you all.