…and the parade of sisters continues as well.  Somehow I have managed to inspire (read: subtly threaten) all three of my sisters to contribute their wisdom nuggets to my blog.  Whatever their motivation, it makes me very happy because each of them has a very different style of parenting and I think they are pretty good at what they do best.

Sister B and I are the closest in age.  She was the one who invaded my pink princess canopy bed when she was less than two years old (I was a much more mature five-and-three-quarters) when Sister C came along.  So sue me that I may or may not have deliberately pushed her out of bed every night so our mom thought she wasn’t ready for a big girl bed and she needed to go back into a crib.  What some call “mean” others may describe as “mad genius.”  It’s all in the point of view, folks.

Sister B was the one who was such a baby when our parents went out of town and left our grandmother, Kettle, in charge (whom I so easily encouraged to go back to her own house for the night…”We’re fine!  Go and sleep in your own bed.  You can come back in the morning after you have your Sanka and a good poop.”), that she cried all night during the massive party I threw because she was scared for all of the teenagers who were getting their drunk on downstairs.  I also made her cry every time I queried, “You’re not wearing that, are you?” as she was about to get on the public school bus and I was walking out the door in plaid polyester to my uniform-required high school.  And I think she cried again when we had a fight with pots and pans that scared Sisters C and D into running away to the playground at the end of our street where a little boy asked them if they had gotten their periods yet.  Wait.  Did we grow up in the ghetto?

Anyway, Sister B and I have history.  Real sister history.  I never had to babysit her.  I was never old enough to change her diaper.  We are four years apart in age so we were never really in school together, but we were together all the time otherwise.  And together we survived the crazy that was pretty standard growing up with our family.

I have since apologized on multiple occasions for being mean (or a mad genius) and making her cry all the time.  And despite having a semi-tortured childhood, Sister B has grown up to become one of the women I most admire in this busted up world.  She completed college in three years, had a big-time career, lived in the city, married an incredibly charming and colorful metrosexual and together they have three great kids (an Aspie followed by two neurotypicals).  After settling in suburbia, Sister B was not content to simply rest on the tailgate-ready 3rd row seat of her minivan.  No!  She dove headfirst into the complicated world of extensive therapies for her son with Asperger’s Syndrome, and by working with the best that Atlanta has to offer they made it possible for him to mainstream by the time he was old enough for kindergarten.  And for the past few years she has been el presidente of her kids’ elementary school foundation, where she has led her team to raise over $90,000 for capital improvements for their school (www.MBEFoundation.net).  Yes, she’s that awesome.  And a little bit nuts.

And now I proudly present her post to you…

Don’t Be Tardy for My Party by honorary guest writer, Sister B

Sister A inherited our Mom’s beauty.  Sister C inherited our mother’s cooking prowess.  Sister D, hands down, got Mom’s empathy.  And I got our mother’s profile (well, really just her nose) and her intense passion for throwing a good party.  My 3 sisters are what you might call xenophobes, or homebodies – happy most often to stay at home versus going out on the town.  But Mom and I are kindred spirits in the social sense.

Mom owned a very successful catering company for 12 years.  I have fond memories of growing up on Chelsea Road surrounded by lots of Mom’s friends/employees who descended upon our kitchen like ants to the anthill each week to cut, chop, dice and slice in preparation for the upcoming weddings, bar mitzvahs and anniversary parties.  I was, and still am, so fascinated by her ability to come up with a party idea and pull it off under budget and exceed her clients’/guests’ expectations.

Our mother always makes a big deal out of birthdays.  Growing up in a big family, I realize it wasn’t easy for our parents to always “do it up,” but Mom always did.  She taught me at a young age that with a great theme and a small budget, you could have a party that no one would ever forget.  And that the secret to a fabulous party was always in the details.

When my husband and I were first engaged, we decided to start a gourmet club where friends rotated homes and hosted a themed dinner party once a month.  Our most memorable was our French-themed soiree, complete with a red, white and blue fabric tablescape and a mean coq au vin (did I mention my hubby is an amazing cook?), ¾ liter of vodka, 8 bottles of wine and lots of beer (for only 6 adults)…the cops showed up because we were being too rowdy with our late-night karaoke.  I was excited because I had earned some validation that we still had “it.”  We also started our tradition of a yearly Christmas Open House and quickly learned that hiring a bartender was a necessity in order to actually enjoy conversations with our guests.

Fast forward several years and three kids later and the daunting task of planning our children’s birthday parties surfaced.  Mom didn’t even have to specify that paying a bouncy house or carting the neighbors’ kids to Chuck E. Cheese were not viable options.  Thus began my quest to plan some excellent parties for my kids with great themes and on the cheap.

The year our oldest son turned 4, he excitedly announced to our family that in honor of his upcoming birthday, he would like an airplane party and I gladly accepted the challenge.  I purchased world puzzles, inflatable globe beach balls and packets of cloud-themed tissues for the goody bags.  We decided we needed some entertainment and hired a girl who did face painting and balloon animals.  We made her dress in a navy suit and airline hat and made her a “Pilot Katie” name badge.  When she showed up at our door in a tight skirt and a low-cut blouse with a boom box, all of the dads in attendance sat up a little straighter hoping to get noticed and our next-door neighbor went home to get a few singles. 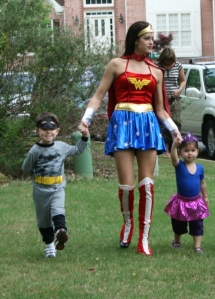 Our middle son was obsessed with superheroes (like most 5-year-old boys), so we planned a dress-up party with lots of photo ops, complete with our neighbor in a Spiderman suit, Sister C as Wonder Woman, and sister D as Catwoman.  And once again the neighborhood dads were happy with a cooler of beer and some eye candy.  I see a recurring theme here…We started a great and inexpensive tradition of creating a CD as a party favor with songs related to the theme of the party.  The parents, as well as the kids, were excited to hear “Wonder Woman,” the “Theme from Superman,” and “Spiderman,” classics every kid should know and love.

One of our favorite kid parties was our oldest son’s racecar birthday.  Thank goodness the weather was supposed to be beautiful.  My husband reluctantly agreed to my latest crazy creative idea of spray painting individual cardboard boxes and letting the kids and affix stickers/decals and black paper plate “wheels” on their cards upon arrival.  We drilled holes on the tops of the finished boxes and used rope as suspenders so the kids could wear their cars at the party.  When everyone finished pimping their rides, we handed out racecar driver helmets and the kids ran around the neighborhood, checkered flag at the finish line and all.  On the food tables, I used black plastic tablecloths and masking tape to create a roadway with dotted lines, tossed on a few matchbox cars and…voila!…instant table décor and entertainment for the kids while they waited for their food.

For our daughter’s third birthday, she chose a rainbow theme and I talked my husband into creating a balloon arch rainbow in our living room out of PVC pipe.  The look on her face made it all worthwhile.  She couldn’t believe we actually had a rainbow in our house!  We had a dance party to “Over the Rainbow” and other color-themed songs and made rainbow necklaces.  We just threw a magic party for our 8-year-old and all of the kids learned tricks and put on a show at the end of the party.

Several times a year, we host a movie night on our lawn.  It’s an easy party to host because we are not entertaining inside.  Everyone brings food and drinks to share, lawn chairs, blankets and bug spray and our kids and friends love it!  Together we are making memories for our children which they will look back on fondly.  So I challenge you to use a little imagination and creativity and you’ll be surprised at how little it takes to throw a party your family and friends will talk about for years to come… and you just might have fun doing it!