Yesterday morning I dropped Kid B off at the high school for her second-to-last day of Summer Bridge Program.  I swung by my sister’s house on the way home to do a book swap.  We were talking for a bit and I noticed that my nephew was playing video games while his three little sisters were bugging the crap out of him.  Knowing full well what it was like to be a kid stuck at home with three little sisters who bug the crap out of you, I offered to kidnap him and bring him to my house to play with Kid D for the day.  So, off we went.

On the short drive over, I fired up the speakerphone and called my house.  When Kid C answered, I told her to tell Kid D that I was bringing him a very special surprise, and then I hung up.

It took no more than 30 seconds for my phone to ring back.

“Hi, Mom?  Ummm, yeah.  I wanted to know if I could have a treat too.  Because I have been really good and all,” said Kid E in his best, I-am-the-cutest-kid-in-the-universe voice.

“Well, kid, you have been  not so bad lately.  But I am bringing a surprise home for your brother today.  You can maybe share it a little, but it is mostly for him.  And you can tell your sister, ‘None for Gretchen Weiners.  You go, Glen Coco!'”

When we got to the house, I had my nephew climb into the way back of my truck.  Kid D was waiting for me at the kitchen door, so I told him he could open the hatch and find his surprise.  When he found his cousin waiting for him, he was thrilled.  They bounded off together to play whatever it is eight and nine year old boys play in the summertime.

A little while later they were eating a mid-morning snack… bowls of cereal and some fruit.  These boys are big enough and independent enough that I don’t have to help them at snack time.  They were talking and eating and having a good old time, but they weren’t horsing around or being rough.  I was nearby in my office working on the computer.

Next thing I know, I hear my nephew say, “Where is your mom?” and then, “AUNT STACY!”

I ran into the kitchen straight away.  A piece of cantaloupe had become stuck in Kid D’s throat and he was choking.  It dislodged by the time I got to him and he was breathing fine, but both boys were very visibly shaken.

I hugged Kid D and praised his cousin for his quick response.  I think I went on to hug Kid D about 17 more times over the next few minutes.  He was truly alright, so I was just an embarrassment and a nuisance to him at that point.

I calmed myself down and took a few deep breaths.  I was spiraling out of control and needed to reign it back in a little.  I can not control everything.  All I can do is teach these kids to act reasonably, follow practical rules and hope for the best.  It is really all anyone can do.

But I still insisted on implementing one new house rule:  No more eating again.  Ever.

At least it will be helpful for me during bathing suit season. 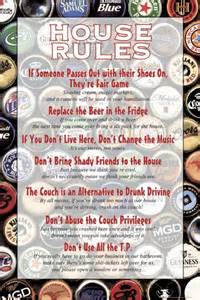 Oh, wait. I think this was from another house that I live in during college. My bad.