…and the appointments and exams just keep on coming.  This morning I took all of the kids (minus Kid A who is at driving school this week… consider yourselves warned) and myself to the dentist for our regular 6-month cleanings.  Our dentist’s office is a really nice place and they have a lot of hygienists so they can be great about fitting us all in at the same time.  And because their staff is so accommodating and they really make a tedious chore into a no-brainer, we have been going there like clockwork two times a year since we moved here.

I think it is standard practice with most dentists, but at ours they do not ask the parent to come back for a child’s exam and cleaning.  That works out well for me because I can’t be with all of them at once, and I certainly couldn’t get my own teeth cleaned at the same time.  The kids’ hygienists just periodically stick their heads in my exam room and ask me questions about their mouths and give me their status updates, all while my hygienist is scraping away at my (relatively minor amounts of) plaque or Mr. Thirsty is sucking the spit out of me (no, that is not a dirty euphemism).  Sometimes they blur together, but I’m pretty good at keeping track of everybody’s individual oral status.

I would give us a B minus for our overall family teeth grade this time around, as Kid B showed a new (albeit small) cavity that has to be filled and Kid C needs sealant on a molar, thus resulting in two extra appointments (that will have to be scheduled around school, as that crap starts in fewer than two flipping weeks).  Kids D and Kid E (his first time!) had great showings in the chair and I was a Superstar!  Funny enough though, Kid D was kind of mad because he didn’t get the absolute best review of the day.  A little background… 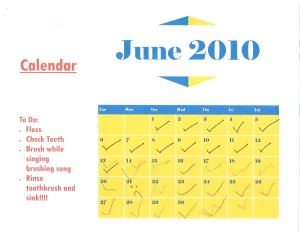 You see, just about this time last year Kid B was guiding Kid D on his development of proper flossing habits.  Together they had created calendars on the computer and every day, sometimes twice day, Kid D would make a note on it when he flossed.  He really liked the visual reminder and followed through regularly, so he had something to be really proud of by the time his check-up rolled around.  He brought it to his appointment and showed the dentist and the hygienists and the desk staff and everybody else in the office with eyes.  They made such a big deal of it that he actually continued to floss regularly for a really long time after that.

But as all things go, this little boy started getting older and more easily distracted and Wii came out with new video games, and baseball season started (twice), so naturally he got bored with the calendar and started flossing less and less regularly.  Some days I was just pleased that he brushed his teeth at all.  I wasn’t even dreaming that he might rinse the sink out afterwards.  I was just hoping for less of an “I just ate a handful of goldfish snacks” smell on his breath and little to no cavities.

So when he went in for his end of the year cleaning last year he was still into good habits, but for his appointment this time the calendar idea had been well out of his routine for a while.  I had certainly forgotten about it.  I’m sure he had too, until he was in the chair and the hygienist asked him if he had been flossing every day.  Oopsie.  Being a good little boy, he didn’t want to tell a lie.

Then he apparently went on to tell her, “I told my mom that we ran out of flossers and she said that she didn’t want to get me any more.  As a matter of fact, my mom said that SHE WAS NEVER GOING TO BUY FLOSSERS EVER AGAIN.  So that’s why I haven’t been flossing every day.”

I rescind the “good boy” comment.  Hey kid, your pants are on fire.