It’s that time of year again, friends.  School is back in session and the kids are settling in to their classes, adjusting to the homework load, and – if they haven’t already – it’s about time to add a sport or activity to the mix.  Load ’em up!  Yeah!

When playing youth sports now-a-days, there is likely the obligatory shopping trip to your local sporting goods store to stock up on the essentials.  Not only do they suck away all of your time; they also suck away all of your money.  And since both boys are playing baseball this season, we tried on some last-season and hand-me-down clothing and equipment first.  It figures that very little of what we had in stock was transferable, so we headed out to buy what was left on our list… grey pants for both boys, cleats because little feet never stop growing, batting gloves to replace the ones that got gum on them last season for Kid D (don’t even ask), and a helmet with a cage for Kid E (gotta protect that pretty face… that’s his moneymaker!).

All of that stuff was important to them, but what do you think was the number one, non-negotiable thing on their lists?  You guessed it… the boys decided that it was imperative that they go athletic cup shopping.

If you are a regular follower of this blog, you may have read about Kid D and his first experience with a protective cup (Protecting the Family Jewels).  I’ve also mentioned his obsession with his junk a time or two before, but Sheepdog assures me that this is standard male behavior.  And Kid E is even more enthusiastic about his, if you can imagine.  So, while we were taking inventory of our baseball gear prior to shopping for more, a very large part of our discussion centered around the balls that are nearest and dearest to their hearts… their own.

Now, the cup that Sheepdog and Kid D settled on last time is likely the smallest size they make.  It is marketed to Age 7 and Under.  And since Kid D is almost 9, he announced that he had outgrown his old cup and needed a bigger one.  Isn’t that always the way?  I did not need Sheepdog’s expertise to recognize that as standard male behavior.  Nevertheless, since we now need two protective cups in the family, it made sense to buy the next size up for Kid D.  And since it was plastic and got washed every time, Kid E could use the old one.

Sheepdog, the boys and I were in the cup aisle at Dick’s (c’mon… where else did you expect we would go?), and they were figuring out sizing.  It turns out the youth cups are all white and then color-coded around the edges (our original one is green).  The one appropriately sized for Kid D came in a standard red color.  Except that the color red on plastic, especially when it is next to a bulge of white, looks a lot more like something you would find in the Barbie aisle.  I steeled myself for a hissy fit in the store because Kid D thought it was bad enough he has to be on the Purple Team (the park is using colors for the first time this season instead of major league team names).  Now he would have to endure sporting a pink cup? 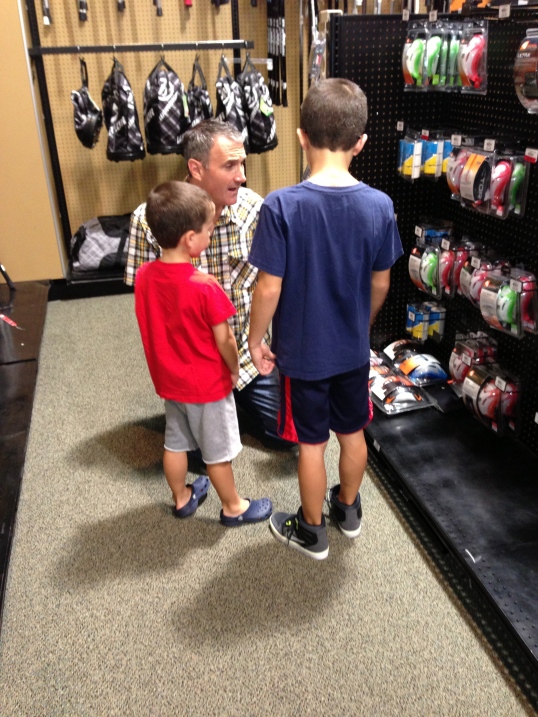 But the fit never came.  Fortunately, Kid D was not fazed in the least by his new pink accessory.  I guess he is more secure in his masculinity than I thought.  He is still beaming about his new cleats, his new gear bag, and the fact that his cup had runneth over in the first place.