On a beautiful spring afternoon in 2005, Good Friday to be exact, Kid A and Kid B were out in the front yard of my mom’s house kicking a soccer ball around.  Sheepdog was at work, but my mom and dad and some sisters and brothers-in-law and nieces and nephews were there.  I stepped inside the house to breastfeed Kid D, who was only four or five moths old at the time.  My dad was doing yard work outside where the girls played.  Then any moms’ nightmare happened – an ear-piercing scream of pain reached my ears.  Even though it was louder and more intense than any I’d heard up until that point in her life, I knew it was Kid B’s cry.  In the twenty seconds it took for me to yank Kid D off of my breast and my dad to carry Kid B (a mother’s instinct is usually right!) into the house and lay her down on the couch I had run every horrific scenario through my mind about what had happened to cause her to create such noises.

It turned out that Kid A had kicked Kid B square in the shin (I told you before… graceful ballerina, clumsy athlete) instead of kicking the soccer ball.  By now the whole family had gathered around to see what was causing the ruckus and everybody was adding their two cents.  There was already bruising and some swelling, but no compound fracture and nothing that was a clear indicator of anything obvious.

“There is no way that a little kid could break her bone from a frontal kick like that,” said both of the brothers-in-law, each of whom played a little high school football.  (To be clear, one B-I-L played a little college ball at Georgia Tech, but that’s not what today’s story is about).

My dad was so busy hugging his favorite grandchild (let’s just call a spade a spade here) that I almost couldn’t hear him say that he thought it was indeed broken.

So I packed up the four kids and drove back home.  I called the pediatrician’s office, which was closed for the weekend, and I was referred to an after hours urgent care for x-rays.  Sheepdog met us at home by then and he tried to lighten the mood by betting Kid B that she did not have a broken bone.  She was still busy chanting, but she shook on the bet nonetheless.  Sheepdog and Kid B headed out for a long night in the emergency room. 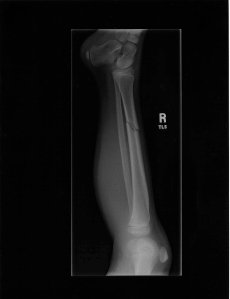 It turned out that Kid B was right, because she was diagnosed with a Z-shaped spiral fracture of her right tibia.  She got a splint and a visit to a pediatric orthopedic specialist to get fitted for a cast.  And did you know that a five-year-old will not fare so well using crutches (their coordination is just not developed enough), so they get to be issued a pediatric wheelchair for the duration of their broken bone healing process?  Question: Where do you put an infant’s car seat in order to push around a pediatric wheelchair (recall that Kid D is only four or five months old at the time)?  Answer: Sucks to be you, lady.  You sure have a lot of kids.

So Kid B got to spend Spring Break and almost the rest of her kindergarten year in a cast and a wheelchair, getting waited on and shuttled around and catered to.  I’m sure she was in pain in the beginning (mom recall of those screams… I still get chills), but I would bet it was a tad more painful for me at one point or another during the whole six to eight week process.  By the end, Kid B was a Rock Star in her school and I was getting phone calls from moms who said that their daughters wanted to have broken bones just like her.  Um, that’s really disturbing and I don’t even know how to respond to that information.  I was never more happy than the day she got her cast removed and had confirmation that the break healed well and should not affect her subsequent growth.  P.S.  She is only twelve and already about five feet six inches tall.

So why am I posting about this story today?  I’ll give you a hint… it is not Good Friday.  Nobody got hurt playing soccer.  There’s not even anybody being breastfed in this house.  I’m sure you guessed it, though.  Yep… somebody broke a bone.  On the First Official Day of Summer Vacation.  Classic.

Kids C, D and E were playing in the basement (it is a nicely finished basement, not some death trap).  There are two things that frighten a mother to her very soul… complete silence when a group of children are gathered together to play and the ear-piercing screams of pain I mentioned earlier.  Out of the blue I heard the latter  – this time from Kid E.  He had tripped on a toy and smacked his other foot against a door as he fell.  One of the coolest parts of this story was Kid D’s slo-mo re-enactment of the fall so I could see exactly what happened.  He was really good at it.

Kid E was limping and wincing.  He’s a tough little man, so I figured something was wrong.  Again I was sent to the same urgent care center for x-rays.  Again Sheepdog bet me that nothing was broken.  Again Sheepdog owes somebody five bucks.  The diagnosis was a fracture of the fifth metatarsal bone on his left foot, which would require a cast for at least four weeks.  When I asked if they made pool and beach-friendly casts, the doctors and nurses all laughed heartily and told me to have a nice summer.

Nothing says "white trash baby" better than a kid with a mohawk in the E.R. for a broken bone

My texts to Sheepdog were as follows: