From April 10 – 17, 1999, with Nanny and Pop Pop happily in charge of a three-year-old Kid A and a five-month-old Kid B, Sheepdog and I set off for a week of some fun, sun and “Bow Chicka Wow Wow” time in the Guanacaste province of Costa Rica.  It was a fantastic vacation filled with good food and drink, exploration of fabulous beaches and restaurants and jungles in a rented jeep, hanging out with cool people and a bunch of wild monkeys watching the sun set over the Pacific Ocean, and – best of all – time alone with my husband at a 5-star beach resort.  I loved every single minute of that trip (except maybe for the lizards in the shower).

It’s a good thing too because it turns out Sheepdog and I would not have another no work/ no kids week away together for twelve more years.  Seriously.  That is a very long time to wait to go on a real vacation, but there was always something more important to spend money on, or a sick and needy kid, or I was pregnant (it happened A LOT) or there was a work conflict.  Plus it turns out that not many people are capable or up for the challenge of watching five kids for an entire week.  Fortunately for us this time around, Sheepdog’s parents agreed (I presume they were not really sure what they were saying yes to when we begged them almost a full year ago to commit – NO TAKE BACKS!) to come down and wrangle the entropy in our absence.

Knowing that it was such a long time since our most awesome Costa Rican vacation together and presuming that our next trip could potentially be that far off in the future, I set out to make this the best trip ever.  I organized, scheduled, planned, prepared and set up the kids and the house to the absolute best of my ability, so it would not be such a burden on their caretakers and so I would not worry so much about them.  With Grandma and Grandpa in charge I knew they would be cuddled, loved, protected and they would play tons of card and board games with them (which is torture for me).  As far as my own preparation, I did P90X and got my hair colored and a mani/ pedi and I waxed and shaved and did all of the things that you need to do to lay around for a week half-clothed/ half-naked by the pool in front of other people.  I picked out and packed some cute dresses and several cute bathing suits.  And then I packed my vacation shoes. 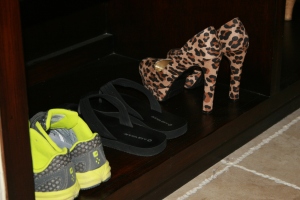 "Are we going to a strip club when we get to Mexico?" - My brother-in-law, Brandon, when he got on the plane and noticed my choice of footwear for the flight to Cabo

It really is true that Sheepdog is a very simple man.  He requires only regular doses of food, sex and biking, and not necessarily in that order.  Anything else is bonus material.  I figured the least I could do to set the tone for our awesome week in Mexico was to wear some sexy shoes on the airplane.  I wanted the week to be special, and that meant the opposite of Sheepdog coming home every day to find me frazzled, tired, unkempt and, more often than not, barefoot and in sweatpants.

In addition to wearing the leopard shoes, I downloaded and read a very dirty book during our vacation week.  And when I say “very dirty” I actually mean there’s not enough Orbitz gum in the world to wash that dirt out.  I am sure I was blushing the whole time I was reading it.  It is very poorly written with a bunch of really cheesy euphemisms and clichés.  The stuff I read was disturbing on so many levels that I could not even wrap my head around most of it.  Yet, if I am being honest I have to admit that I read the whole damn thing.  Not that I got into all of the pervy stuff in the book, but it most definitely set a mood for our trip.

So the preparation and planning and even the twelve-year wait were all definitely worth it.  We didn’t worry too much about the kids and we enjoyed each other and Sheepdog got to golf three times and take a four-hour mountain bike ride and I lounged in the sunshine by the swim-up bar (we have very different ideas of what to do while on vacation).  By the end of the week I felt refreshed and recharged and ready to get back to the kids and our regular non-vacation lives.  I felt like I could deal with the temper tantrums and wash the dishes with a smile, at least for a little while.

It’s a good thing, too.  We came back to little kids who were mad, mad, mad that we had gone away and teenagers who needed this and needed that and everything was URGENT and it is a very good thing that I refilled my patience bowl on that trip because I sure have needed it lately.  Having all of these kids and trying to raise them without causing irreparable damage and running a family and a home can be incredibly rewarding but it can also be hard on your body and soul.

So every once in a while I’m going to think back to our fabulous week in Cabo and I am going to take out my leopard print platforms and I am going to put them on while I make the beds or fold the laundry or do some other menial chore.  I’m hoping that will get me through until the next time Sheepdog and I go away together.  That, and the dirty book is actually the first in a series of three.