Originally, Kid A was planning to take a nanny job with three little kids in a nearby neighborhood for the summer.  But then she was offered a summer internship at my dad’s law firm in southern New Jersey.  She weighed her options: Babies or the beach?  Wearing t-shirts covered in finger paints and spit up or dressing up for an office job every day?  Living at home with your parents who are always complaining about money or staying with grandparents who basically buy you whatever you ask for?  Kid A is smart, has always been independent, and has had one foot out our door since she went to Spanish immersion camp the summer between her sophomore and junior years of high school.  Obviously she chose the internship.  She has been gone (with the exception of a long weekend when she came back to GA for college orientation) since the beginning of June.

Kid B was relied upon heavily during the house selling and buying phase of the summer.  Basically, she raised the other kids for us.  Well, she did along with all of the video game systems we have in the house.  Do you know what happens when you leave a 15-year-old in charge?  I’m talking no bathing until the weird smells start to offend, cereal/ peanut butter sandwiches/ frozen chicken nuggets as the “fancy” meals, and a glazed look in everyone’s eyes as a result of 8 – 10 hours a day of electronics exposure.  I wasn’t paying attention to how bad it had gotten until one morning, after dropping Kid B at the soccer field for training, Kid E and I were having a nice car conversation.  Then he asked me if I knew what a K/D spread was.  I did not, but said I could look it up when we got home.  Imagine my horror when I learned it was short for Kill/Death ratio (basically, how many kills you achieved before your character was in turn killed), tracked in Halo, a military science fiction video game.  Parenting Fail #1,024 for the summer.

Me:  Um, you know that this is a video game and you NEVER, EVER shoot anyone in real life, right?  Because when you die in real life, you don’t get more lives.

Fortunately for everyone, I was quickly jolted back into a lead parenting role as Kid B had a trip of her own planned this summer.  She went to Europe to guest play with a team from Mount Pleasant, South Carolina in an international soccer tournament.  She was gone for almost two weeks.  She traveled to several cities in Spain (including Barcelona, San Sebastian, and Madrid) as well as the beach in Biarritz, France.  She had the trip of a lifetime and didn’t miss home very much at all.  As a matter of fact, she admitted to crying on the plane ride home because she couldn’t stay there for the rest of the summer.

For me, the time with both Kid A and Kid B gone was amazing.  Don’t get me wrong… I enjoy both of them tremendously and love that they are my children.  But let’s be honest about the Catch-22 situation involved in raising independent, strong-willed, powerful women (which is my end game in successful parenting Kids A, B, and C, by the by).  There is the occasional tension and butting of heads between teenage girls and their mothers.  And I’m saying that in the nicest way possible.  Add in PMS, some OCD, the DMV, a deficit in R-E-S-P-E-C-T, plus a pinch of sarcasm, and you likely get one or more parties CRBT (crying real big tears).  I already knew it, but while they were gone I was hit once again by the fact that raising teenagers is really hard.  I’ve stopped counting all of my parenting fails with them.

Oh, of course I will.  I used their time away to thoroughly enjoy the three littles (well, Kid C is not so little anymore, but you know what I mean).  We went to the movies and the pool and we played games and stayed up too late and went out to dinner (it’s much more affordable with less people!).  It was relaxing and light and fun.  No matter how many kids you start out with, it turns out having fewer is kind of a vacation.

But when it was time to pick Kid B up from the airport, we were all excited and ready for her to be home again.  Especially the ‘kids’ that she raised for us. 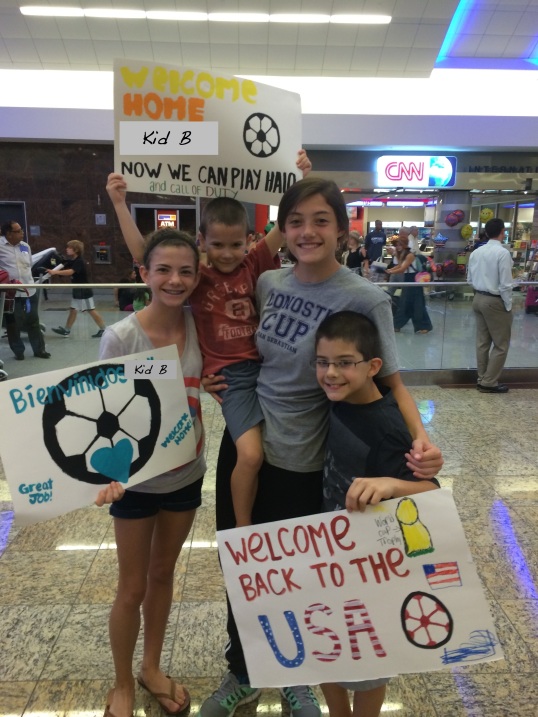 Now we are back to 4/5.  And even though it is only for a little while, I can’t wait for all of my chickens to be home.  Having Kid A go off to college in August will definitely be interesting.