“I feel like I am going to DIE,” I whispered from 17F across the plane seats as we jetted toward Spain.  It was midnight to my body, Eastern Standard Time, and I had been upright for 18-plus hours.  Kid A, my sisters, and I had flown into Atlantic City from Atlanta the day prior, then traveled on Monday in a monsoon by bus-limo to the Philadelphia Airport to take a flight to Barcelona, which would land 8AM on Tuesday.  I hadn’t gotten a wink of sleep. 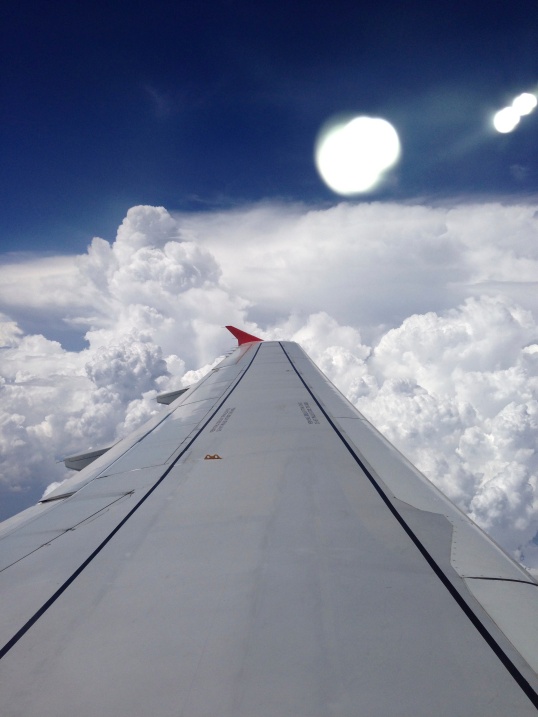 “There’s a colonial woman on the wing!” – Annie (after she mixed alcohol with Xanax during a flight to Vegas), Bridesmaids (2011)
P.S. I really took this photograph on our flight from Atlanta to Atlantic City.  Isn’t it so cool?

“It’s like when you have a newborn!” exclaimed Sister B, who was against the window in 17A.

From 17 D, Sister C agreed.  “Yeah, I would trade just about anything for some sleep right now.”

Kid A had been sleeping in 17C for three hours.  Teenagers can sleep anywhere.

We were so jealous.

“I would trade my first-born for a reclining pod in First Class,” I admitted.  “And conveniently, she is on this plane with me.”

There was no one in 17E, but we still couldn’t get comfortable enough to rest.  And there were miles to go before we would sleep.

We arrived in Spain to beautiful weather… it was bright sunshine and 80-plus degrees outside.  After waiting and gathering our luggage, and a quick power nap for me on a cold, marble pillar nearby, we boarded a short shuttle to our port of departure.

Conveniently, we were able to go to our rooms on the ship earlier than expected.  Our luggage hadn’t arrived yet, but we quickly got the lay of the land and saw the room we would call home for the next twelve days at sea.  “Tiny” was a generous description, especially with three of us sharing a berth, but no matter.  This was going to be an adventure!

The Royal Princess was scheduled to push off later in the day.  We weren’t due to be on board until 5:30PM, so several of us decided to tour Barcelona for the day.  We took a bus into the marina district and we walked from there.

For those of you still keeping track, none of us had slept since a couple of nights prior.  And we were getting a little punch-drunkety.

We made our way through the narrow, crowded streets as we held our purses close to our bodies.  We walked around with cameras pointed at the architecture and other unique sights in an attempt to capture the feel of the city in just a few short hours.  All I could see was graffiti, discarded McDonald’s wrappers, some fairly unsafe construction, and a lot of other tourists.

It is weird what sleep deprivation can do to you.  I was exhausted on a cellular level.  Yet, I still thought it was beautiful.  And I was in Spain.  Amazing!

After much walking and a little window shopping, we finally found the Museu Picasso.  I remember seeing paintings and vases and pitchers and sculptures, but I only saw them with my eyes, not with my heart or soul.  I didn’t feel any connection to the artist at all.  Utter and extreme weariness trumped everything at that point.  My dad sat on a bench by the gift shop.  He sighed and said he  thought he was missing the art gene. 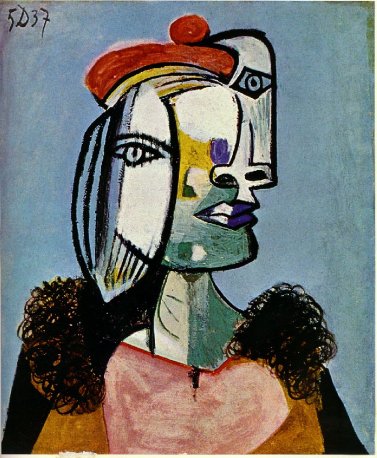 “Picasso used to say to me, ‘The smell of opium is the least stupid smell in the world'” – Jean Cocteau

Really and truly, how high was Picasso when he painted that?

Eventually, it was All Aboard.  We also desperately needed showers.  So we checked in and we scrubbed and rinsed the travel off of our bodies just in time to follow the crowds to our assigned Muster Stations for a quick safety drill.

We were barely still standing upright as we carried our bulky, orange accessories down to a dining room, with the rest of the people with whom we could potentially share a life boat or a deserted island for the rest of our days.

A message was delivered via loudspeaker from the ship’s captain.  He sounded exactly like the school principal from the television show Glee.  Every night for the rest of our cruise, when the captain would address the ship from the bridge, I would make the same comparison and think what a wicked shame it is that that talented Cory Monteith boy died earlier this summer.  Oh, Finn… such a waste!

During the rest of our practice at Muster Station F, we sat at a table with a mother and her daughter.  The teenage daughter was not yet unplugged and she was fiddling on her phone.  The mother was lost in her own thoughts, but likely hearing Sister C, Kid A, and I as we mumbled how completely and utterly tired we were.

I had become completely nonsensical at that point.  I said something to Sister C and Kid A about “getting so much of the not having of the sleep,” and they burst out laughing.  They knew exactly what I meant because they felt it too.  We were totally sober, yet completely intoxicated by our sleep deprivation.

Hey!  Maybe I did get something out of the Picasso Museum.  Do I smell opium in here?

Biking is good, but bicing makes me think of cupcakes

Pretty balcony gardens (with minimal laundry hanging from them)

This is my kind of shopping!

And this is my kind of restaurant!

Naked (mannequin) girl on the balcony for Uncle Tom

Bradley Cooper is attractive in EVERY language

Your cruise ship is that-a-way!