At one time or another I have commented that these kids are all just like their father.  Typically, the observation comes after they do something either really smart or really stupid, which is fairly often.  It is slightly more rare, however, that I will notice any mini-me tendencies in them.  Except when they do something super awesome or funny.  Like Kid C this morning.

Kid B is at summer school.  Not really.  Well, she is at school, but it is a Summer Bridge Program for rising 9th graders so she can fit a second language (Latin, of course) into her schedule next year.  She is taking a health class.  The first day she brought home a parent permission slip for me to sign so they can teach her sex education at school.  When it comes to information, I believe “the more, the merrier,” and it is always interesting to hear my kids recount the versions they get from the public school arena, so I enthusiastically signed off on that.

Anyway, the rest of my chickens were hanging out in the basement this morning.  Kid A was Instagramming, Kid D was watching baseball/ playing MLB 2K12 on the X-Box, Kid E was pretending to be a puppy (complete with sound effects) and Kid C was pretending to be his owner.

Kid C was quickly bored with her little brother.  I was half-listening/ half not when I heard her tell him that he’d better behave or he was going to the pound.  Hey… at least she didn’t say that she would drive him back to the foster mom’s house after 48 hours (Undercover Awesome), right?

Then she started a totally different conversation with herself…

“There once were these two refrigerators.  They used their ice makers as a mating call.  When they drop the ice and make the sound at the same time it sends an electronic pulse, and then they make a baby… and that’s how mini fridges are formed!” 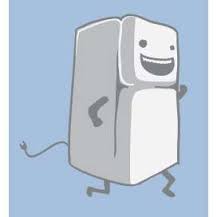 I am definitely signing the sex ed permission slip for THAT kid when the time comes.