This weekend Sheepdog and I went out.  On a date.  To a Ball.

I know, I know.  How did a girl who is – by conscious choice – perpetually in flip-flops and sweatpants, and usually in bed by 8:45 on Saturday nights, end up at a fancy-schmancy ball?  So weird and just wrong, am I right?  Well…

Earlier last year I was talking to my dad about travel.  He and my mom are fortunate in that they go on a lot of trips throughout the year.  But one of the things that drives him crazy is the inefficiency of commercial airports and airlines.  Well, duh.  Flying sucks nowadays.  Gone are the days when everyone is all dressed up in the airport like they are straight off the set of Mad Men.  These days you are more likely to see people in their actual pajamas than you are people in suits.  It is no wonder that we are treated like idiot cattle and consider it a “good flight” if we don’t have to sit in our teeny, tiny seat next to somebody who needs more than one seatbelt extender (more often than not this is also the person who has the very questionable showering habits) and/ or we didn’t have to hang out on the runway or tarmac with only recycled air for countless hours waiting for fill-in-the-blank (clearance to take off, repair of the broken filangie, the pilot to sober up, blah blah blah).  So, half joking but half seriously, I suggested that he look into private planes.

One thing that I will tell you about my dad is that he is a big talker.  Not that he doesn’t often deliver, mind you, but he sure does like to make grandiose plans, especially around cocktail hour.  And only about 17% of those plans actually come to fruition.  For example, just last year he brought up the idea of “The Epic Trip,” involving him and my mom, me and my three sisters, and our husbands.  He sent out an email to all of us that explained how he wanted to go somewhere and do something truly meaningful together, so he asked us to submit ideas and wish lists.  The girls dreamed of huts in Bali, the boys named world class golf resorts, and Sheepdog wanted us to work on a dude ranch in Montana.  The best idea came from the Other Rob Fisher (long story short, my dad always accidentally uses a bogus email that he thinks is for my brother-in-law, but in fact belongs to a really funny guy with the same name who always comes up with awesome responses to our group missives, without acknowledging that he is not actually Our Rob Fisher – it can sometimes take a while for anybody to catch on), who suggested we should go surfing in South Korea and he attached an article like this one to the email:

Surfing in South Korea (AT YOUR OWN RISK)

Anyway, I looked into flying on private jets.  What I discovered was a whole new world of luxury and lavishness that I had never before allowed myself to fantasize about.  But after peeking behind that curtain, I was all about it.  And from what I have heard from those who have flown this way before, it is like crack.  You will never want to go back to Hartsfield-Jackson or Spirit Airlines again, sister.

So I reached out to a couple of companies on my dad’s behalf.  We went back and forth for a while and my dad and I finally got our schedules to mesh and we went to a meeting a few weeks ago with a rep from one of the best.  And I think the big talker actually got excited about the idea of a private plane.  We will see once the quote comes back.  But in the meantime…

The rep called me last week to see if I (or my dad, more importantly) had any questions.  I actually did, so I met with him one more time.  He also mentioned that he had two extra tickets for a black tie event and asked if Sheepdog and I would be interested in attending, along with him and his wife.  They also have a crap-ton of kids, like us, so he figured us moms would be all excited about getting dressed up and not having to take care of them, if only for a few hours.

Normally, I would make up some excuse as to why we were unavailable, but I recently made a promise to myself that I would try new things.  I vowed to go out of my comfort zone and be open to new people and experience different adventures.  So far, all I have done is use a telephone number instead of a website, when available, to deal with customer service issues.  And I thought I was making grand strides!  Before I could even control myself on the telephone, I blurted out that we would love to attend The Ball with them.  Gasp.

We ended up having a really fun night.  In typical fashion, I wanted to back out around 4PM.  Sheepdog was sick with a cold, the boys did not want us to leave them, and it started raining buckets.  But I dragged my sorry butt into the shower and proceeded to get dolled up (hair AND makeup… I know!).  Sheepdog put on his tuxedo (he looks fiiiine in a tuxedo, by the way – more incentive for me), and off we went.  The Ball was to benefit the American Heart Association, so there was a silent auction and dinner then a live auction.  It was really fun to watch as people raised their paddles to spend thousands of dollars in support of a great cause (and a trip to Hawaii).  We really enjoyed the rep and his wife too.

One of the funnest moments of the night for me was seeing that another woman had on the same dress as I did.  I pointed it out to Sheepdog and he tried to make me feel better by saying hers was “more purple” or something, but there was no denying it.  I bought it off the rack closest to the cash register at Macy’s, for goodness’ sake, (yeah, I’ve never been much of a shopper) so what did I expect?  I honestly did not care, but thought it would be fabulous if Sheepdog ever so subtly took a picture at The Ball of me and the woman “together.” 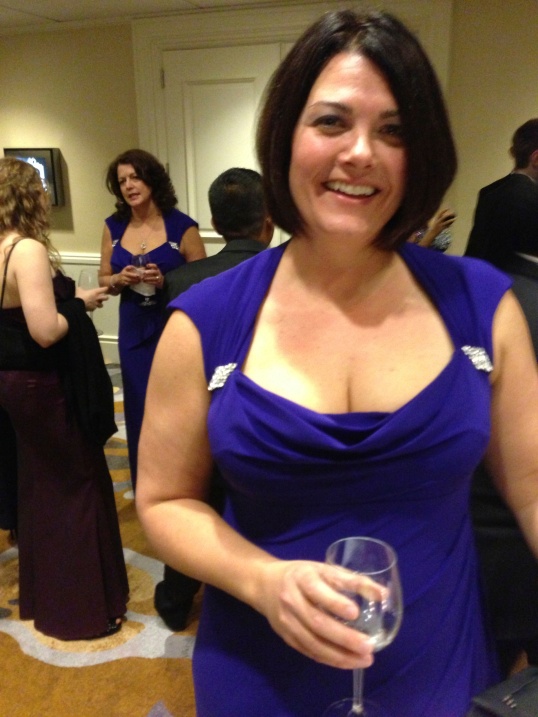 Who Wore it Better?

Thus confirming that, despite even my good-hearted attempts to evolve as a person and try new things, you still can’t take me anywhere.

6 responses to “Take Me Out to the Ball”