At the beginning of the school year a neighbor walked by wearing sunglasses on a cloudy day.  It turns out he recently underwent laser eye surgery to correct his vision, and light sensitivity was a short-term side effect.  Nonetheless, he spoke very highly of the procedure.

When I went to get my hair cut (and colored, if I’m being honest) last month, my hairdresser reminded me that she had the same procedure done about a year ago.  She also was extremely pleased with the results.

That very same week I got a flyer in the mail about the very same surgery from the very same doctor who those two couldn’t stop raving about.  I figured that it was the universe telling me it was time to stop spending all of Sheepdog’s money at 1-800-contacts.  The flyer had a QR code, so I scanned it with my phone and booked a free consultation for the morning after my birthday. 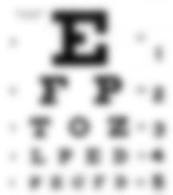 Bad vision or too much wine?

After explaining to both the tech and the optometrist that “my eyes weren’t normally that red,” (I drank an entire bottle of wine all by myself at my happy birthday dinner) they said no matter, everything looked great and I was an ideal candidate.  The only problem was that the thickness of my cornea was borderline and the surgeon may choose to do something more conservative called PRK instead of LASIK on me.  It has similar success as far as results (some say even better), but it is more painful and comes with a longer recovery time.  They recommended not wearing contacts for a few days prior to the procedure because sometimes that helps to tip the scales in LASIK’s favor.  I checked with Sheepdog about the schedule for the surgery and recovery and he gave me the thumbs high.  Excited about finally seeing the world without corrective lenses (and maybe still slightly loaded from the night before),  I scheduled my eye surgery for one week later.

One week later just so happened to be the morning after Halloween.  Not a big deal, except I forgot to do all of the pre-surgery stuff that they instructed me to do.  With Sheepdog driving, we showed up for early morning pre-school carpool without any car seats in the car.  I realized I had forgotten to fill all four of the prescriptions they told me to fill prior to coming in.  And I left the extremely important paperwork folder at home.  I was a total mess.

Sheepdog thinks I was secretly scared to get blasted in my peepers with a laser and that’s why I was so uncharacteristically discombobulated.  But since most places presume that they will be dealing with idiots, the eye surgeon had me covered and even my juvenile subconscious attempts at failing to prepare were thwarted.  So after signing away my life (or at least my right to have eyes that can actually see) in waiver forms, I was lying on a table with my right eye numbed by drops and clamped wide open.  What was I thinking?  Let the torture begin!

“If you’re going to swap my eyeballs for new ones, will you be sure to give me something really funky… like neon green or amethyst eyes?  I look wicked good in purple.” – Me trying to break the ice with my surgeon prior to PRK.
Photo (and my worst nightmare) courtesy of Minority Report (2002)

Actually, the procedure itself didn’t hurt.  It was definitely weird, but it was not painful (even though I had to have PRK instead of LASIK).  Afterwards, I did mention to the doctor that the smell of burning eyeballs is something he may want to consider warning the folks about.  He gave me a scroll of instructions and a scrip for Vicodin and sent me on my way.

My vision was extremely blurry and I was blinded by the slightest glimpse of sun, but I could already sense an improvement in my vision.  The scroll said that Days One and Two would be tolerable, but during Days Three and Four I “may experience some discomfort,” so I hunkered down and got stuff ready for Sheepdog to be in charge for the long weekend.

I learned several things during my recovery period:

1.  I am a fast healer.  By 8PM on Day One I could no longer keep my eyes open, which meant I was a full day-plus ahead of the scroll’s timeline for “discomfort.”
2.  I am capable of hibernation.  I went to bed on Thursday when my eyes started hurting, and I slept until 6AM the next day.  Less than two hours later I was back down for a nap.  Throughout the rest of the day I would sleep for two or three hours, wake for thirty minutes or so, then go back to sleep.  I do not know if I slept so much because my body was healing or because I was so bored.  Probably both.  I could not open my eyes, therefore I could not watch TV, nor could I read.  All I could do was hang out and chat with God, but he was preoccupied helping people in NJ and NY because of stupid Sandy.  So I was basically on my own, without even a bloody-handprinted volleyball to call my friend.
3.  Doctors can be tricky little wordsmiths.  “Light sensitivity” can imply that you may need to have a pair of dark sunglasses handy on a bright day.  Yet it can also mean that you have to turn off every source of light inside your home, close every curtain or blind and duct tape the cracks because even the smallest ray will send your brain into a tailspin.  It would be best if you lived in a windowless cave. “Discomfort” is also apparently on a spectrum.  My particular level of “discomfort” was akin to having my eyeballs rolled in sand, boiled, then put back into my head.  The doctor said that my recovery would take longer if I used the pain drops, so I toughed it out.  Fortunately, I am a Jersey girl and Jersey girls are badass.  Also fortunately, the painful part lasted less than two days.
4.  You can actually get dehydrated from your own tears.  During Days Two and Three my eyes did not stop watering.  I had a constant river of salty drips streaming down my face.  It was so bad that by Day Four I had a red, flaky fu manchu mustache of dry skin on my face.  I used an entire bottle of Oil of Olay that weekend.
5.  Sheepdog is a lousy nurse.  He is wonderful at many, many things, but caring for a temporarily blind wife is just not in his wheelhouse.  I didn’t look any different to him, so he was over the whole, “But I’m handicapped!” even before that first weekend came to an end.

I am now 11 days post surgery, completely pain-free and able to see so much better than before.  I no longer have to wear my sunglasses at night and I have visual improvement every single day.  I may not have gotten the ‘”I can see!” said the blind (wo)man’ moment that LASIK patients apparently get to have, it is still so amazing to me that I am walking around the planet wearing no corrective lenses.   It is truly awesome.

Oh, and 1-800-contacts bought back all of my unopened boxes of contacts!

One response to “I Once Was Blind”