I love that joke.  Probably because I am a math book.  And one of my biggest problems keeps popping up lately… I am very ornery and I tend to bring out the ornery in those around me.  And that can get us into some hot water at times.

For example, I see Kid C and D’s elementary school bus driver every weekday morning.  He is a really nice, reliable man in his late forties or early fifties.   He drives safely and he keeps the kids in line and they all say he is a great bus driver.  Everybody likes him.  I even know his wife (she was the previous elementary school bus driver for Kids A and B when we first moved here).  We always exchange pleasantries and what’s-going-on’s, but we are usually limited to yelling just a few words back and forth to each other over the very loud diesel engine.

Prior to Spring Break he told me that he was going to Las Vegas for vacation.  For the last few days before school was out I would yell, “Vegas, Baby!” while raising my arms and laughing uncontrollably whenever he opened the bus doors.  The other kids on the bus looked at my kids and were like, “Is your mom drunk again?”  Whatever.  It made me giggle.  And, no, there is nothing else in my coffee.

So when we returned from Spring Break and all of the groggy kids were climbing onto the school bus on Monday morning I asked the bus driver how his trip went.  He smiled a wistful smile and said it was really fun, as if he had either lost a lot of money at the craps tables or he really wished he was still on vacation.  Or both.  I didn’t want him to be sad, so my ornery busted out with some bright-side support and I yelled, “At least you still have your pants on!”

He laughed out loud and then succumbed to my bad influence.  The engine was very loud but I think I heard him yell back, “Yeah, but I’m not wearing any underpants!”  …in front of a school bus full of little kids.  The poor man realized what he said as soon as it came out of his mouth and was mortified.  Imagine the face that a minister would make if he dropped the F-bomb in the middle of a church picnic.  The bus driver made that exact face.  Thank goodness all of the kids already think I am crazy and don’t pay attention to anything I say, so nobody was really listening to us anyway.  I don’t want anybody getting in trouble, so I will say again that the engine was really loud and I probably did not hear him correctly.  But if he did say it, then chalk up one more for my very bad influence. 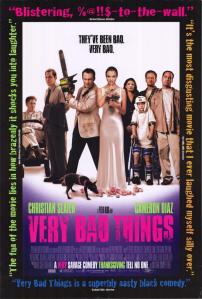 What happens in Vegas, stays in Vegas. Thank goodness.

Speaking of Vegas, Sheepdog gave a speech on food traceability and its impact on recalls in litigation at a food-borne illness conference in Las Vegas last week (I know, I know… how sexy is that?).  Now, I have shared a lot about Sheepdog over the past year, so I feel like you all should know him pretty well.  Even so, I can not stress enough how much of a square peg Sheepdog is in the holes of Sin City.  He does not drink, he is the married father of five children, and if he is not working like a madman to pay for all of those children to be housed, clothed, fed and educated, he is either running or riding his bicycle somewhere.  Not exactly the things that come to mind when you think of Vegas, right?

Sheepdog is more than a fish out of water on the Vegas Strip.  The place genuinely scares the crap out of him.  He went there only one time years ago for our brother-in-law’s bachelor party weekend.  He went out there with something like $200 “fun money” in his pocket (the most money he ever had in his possession at one time up until that point, and it was a big deal financially for us to send him there with that much) and then called me from a strip club or somewhere because he had already used up all of the money.  After only being there for an hour.  I won’t even say how much cash he ended up dropping that weekend, but it was not an itty-bitty number.  Apparently there was just so much of everything available twenty-four hours a day.  And apparently Sheepdog’s intensity does not translate into anything good in a place like that.

So Sheepdog and I were both joking how ever since that trip Vegas scares the bejesus out of him.  And it turns out that at least somebody was paying attention when we were talking.

On the drive home from preschool on Wednesday, we were talking about Sheepdog and I reminded Kid E that his Daddy was in Las Vegas.  From the backseat I hear him say to nobody in particular, “Daddy is a-scared of Vegas.”  For whatever reason, I found this to be particularly funny.  And I found it to be even more hysterical when Kid E asked what, specifically, it was that Sheepdog was a-scared of.  Cue the ornery me.

Now, I’m not proud of this (although I do keep laughing about it), but I told Kid E that Daddy was scared of “too much boobies and drinking and spending money.”  And being a four-year-old boy, he thought that me saying those things was absolutely fantastic, and he proceeded to repeat them over and over and over again.  And I, of course, kept encouraging him because he follows up saying “boobies” with that priceless little kid giggle that just melts my heart.  At least I did remind him that he wasn’t allowed to mention any of this when he was at his Lutheran Church-based preschool.  Fingers crossed that I don’t get a note from his teacher anytime soon.