I am the all-time Champion in my house of the most useless game in the world.  Hey, at least I am winning at something.  I have seen so many movies and so much television that I can identify actors and actresses on a movie or show and then link them to a part that they played in a much older movie or show.  The farther back you go and the less they resemble the former, the more street cred you get for the call.  And thanks to the site http://www.imdb.com (the International Movie Database) there is a go-to fact checker that can confirm just how awesome I am almost immediately.

Sheepdog tries to claim superiority sometimes (his IDs always come from completely irrelevant movies or shows that nobody except him ever saw, so I don’t count those… I know that George Clooney was on “Facts of Life,” but I wasn’t watching it live; I was out having fun in high school), but even he can not deny how incredible my latest call was.  Last night we were catching up on a couple of Raising Hope (FOX, Tuesdays @9:30/ 8:30c) episodes.  When we got to the one called “Kidnapped” they had an actor playing a police officer in a gas station convenience store.

After less than ten seconds of his screen time I screamed, “Press pause!”  Then I threw down the gauntlet by claiming that I knew who the actor was and a universally identifiable role that I can link him to.  Could Sheepdog say the same?

“Give me a minute!” he barked back as he squinted his eyes and waited for something to connect in his memory.  Nothing did and I got impatient because I thought I might just explode from my own awesomeness.

“Jurassic Park!  Somewhere near the Badlands, Montana!  Dinosaur dig!  The kid that says to Dr. Grant, “That’s not very scary.  More like a six-foot turkey,” I yelled excitedly as I made slashing motions across my chest and belly.  “Kids smell!  Babies smell!” 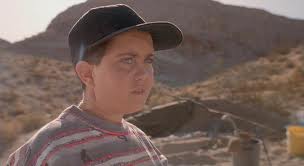 Sheepdog looked skeptically at the screen and shook his head in denial.

“Challenge accepted,” I said.  “Go check the database.”  I had so much adrenaline pumping that I was vibrating.

I’m sure you can already guess by now that I won.  Same kid.  There was something in his eyes.  I didn’t even need to hear his voice or watch the nuances in his mannerisms.  It really was a most excellent get, if I do say so myself.  It was almost as good as the time I was watching High School Musical (don’t get me started… it was under complete duress, I swear!) and I identified Ms. Darbus, the director of the school play, as the character Cassie from A Chorus Line  (1985), starring Michael Douglas.  BAM!  That was amazing!  But it was completely wasted on my kids and Sheepdog, who had never seen A Chorus Line.  I surely made them watch it after that.

Whatever… I am still the all-time Champion in my house.