First things first… I realize that I forgot to make a Harry Potter reference in Friday’s post.  I will make up for that by doing two today.  My only excuse is that I have a horrible short-term memory.  Seriously, you could tell me something today and I might forget by tonight (unless it is good gossip).  I can re-watch movies and re-read books and I get excited about the endings because I have forgotten what they are.  I am just special that way.

So I was all mixed up about what day it was from being on vacation and the trip back and I almost posted yesterday.  Then I remembered that there is no post on Sundays.  BAM!

I survived packing day on Friday.  More importantly, everyone else survived the Master Packer and all the craziness that surrounds me.  My mother-in-law lovingly said I was actually more of a “Mother Packer,” which I thought was kind of sweet.  Either way… I got everything washed, gathered, packed and loaded just as a mega-storm bore down upon the eastern seaboard.

Rewind three hours.  Kid E decided to have a meltdown over nothing/ everything and no one but his Mommy could soothe him.  Unfortunately, my attention needed to be elsewhere.  So the background soundtrack for the Pack was a whiny and crying Kid E as a very sweet and helpful (although sadly ineffective) Kid B held him and tried to calm him down.  This as a news alert flashed across the television screen for a tornado warning in Atlantic County, which we get all the time in Georgia but they rarely see at the beach.  Next thing I realize, Kid D was crying inconsolably.  I went to him to see how I could calm him down and he explained through heaving chest and jagged sobs that “(he didn’t) want to die in a tornado.”   Me neither, pal.  So you gotta buck up and let mommy do her job.  I can barely do it with one kid’s screams echoing through the house, let alone two.  So, I refocus Kid D with a video game, reassure him that we will go down to the lower level of the house if a tornado does indeed come through and I plow ahead.

I had to load the truck in stages.  First, earlier in the day I attached the cargo roof bag and put all of the beach gear inside.  This had been done prior to the trip up by Sheepdog (who is at least five or even six inches taller than me – P.S. I think I am shrinking) and I had a hard time reaching the roof to put stuff in.  Sheepdog also had a helper (Kid A) and I was in the house taking care of the other kids.  I had no assistants (the girls were driving back from Hershey Park with my mom and dad), it was raining, and the boys yelled off of the deck that they “needed me for an emergency” about 14 times in a half-hour period.  But I got it done.  Check.

Then we had to load the way back of the truck with all of our stuff.  This took most of the day as I had to wash some stuff, direct the girls to pack their things, presume that Kid C would forget most of hers and compensate for that, pack all of the boys’ stuff and my own as well, plus all of the extras.  The storm started up again around dinnertime, so my dad suggested that I back the truck into the garage instead of loading it outside in a rainstorm.  I had to leave it sticking out about two feet so I would have room to attach the bike rack.  The rain kept coming and my dad started pacing in front of the truck because the crazy rain was coming down sideways (of course it was!) and all of his tools were getting wet.  He kept assuring me that it was “not a problem,” yet he was standing in front of the shelves trying to block the weather the entire time.  Then he hung up a towel.  And we still have Kid E throwing a tantrum-to-end-all-tantrums from above.  Awesome, right?  But I got it done.  And loaded.  And we didn’t have to leave anything behind (well, I almost had to leave Kid A’s guitar there – yes, she brought her guitar – but I was able to shift things around and make it all fit.  Check. 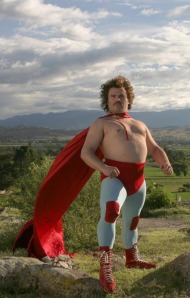 Finally I was putting the bike rack onto the trailer hitch.  But I couldn’t find the stupid effing cotter pin (it wasn’t actually an “effing” cotter pin until it started hiding from me, so once I found it in the glove box – smart planning on my part, right?  that’s how I compensate for the whole short-term memory loss thing –  the cotter pin and I became friends again).  I made my dad go upstairs because he was just stressing me out.  I wrestled (literally – at one point I was straddled on the bumper doing some Lucha libre moves in order to get the three bikes onto the rack).  But I got them on, strapped them in, and this job was done.  Check.

I was a sweaty mess.  My dad directed me as I backed the truck up so that he could shut the garage door for the night.  It fit by mere millimeters.  Good thing because I didn’t really want to leave the roof bag and the bikes out in a tornado and I don’t know if I could have watched while my dad nailed a tarp to the garage opening.  And trust me, this was surely his next step.

So I went in to diffuse Kid E’s meltdown (yes, he was still actively having one – he is quite tenacious), shower and go to bed.  I set the alarm for 3 a.m. and crashed.  Hard.

I will continue with part two of this story in tomorrow’s post.  And, yes, I realize that I only included one Harry Potter reference today.  I got to writing and I forgot about it.  And I wasn’t about to rework the whole story.  Lesson of the Day:  If you drink too much in college you will forget stuff when you are old.