We arrived on the beach the other day, with our small tribe of people and accompanying mountain of gear. No sooner had we staked claim to our parcel of sand and started to assemble our little beach village than Kid C announced to me that her bikini top was broken. Seriously broken… the plastic clasp had completely cracked in two, and the sides were not long enough to tie together.

Now with Kid C you never know if it just broke when we got onto the beach or if it was broken when she put it on earlier in the day and she got distracted by some confetti or a blue bird or a car alarm and forgot about it until just now when we can’t really do anything about it, but that issue is actually beside the point. Her top was busted and something needed to be done.

My solution was for Kid D to loan her his rash guard for the day. Unfortunately, his rash guard on this day was white and at least one season old (read: almost transparent even when dry – seriously, I don’t even know why he was wearing it). I immediately thought back to Spring Break 1989 and a particular wet t-shirt contest in Daytona Beach that I may or may not have participated in, and a shiver went through my entire body as I heard my mom saying, “I can’t wait until you have daughters. Payback is gonna be so fun to watch!”

Now Kid C may not technically require a top based upon her cup size, as she is a skinny 10-year-old girl who weighs less than 55 pounds soaking wet, but she is clearly a female and she can not go around all day with nothing covering her top half. We had several cotton shirt and/ or cover-up alternatives between the rest of us, but she is so tiny that even the smallest of them would fit like dresses instead of shirts, and they would not fare well in the surf. She would be uncomfortable and wet all day long (and she would surely not suffer in silence).

But fortunately for Kid C, Sheepdog was with us and he is awesome in these kinds of situations. He examined the broken plastic clasp, estimated the length of the straps, analyzed a few matrices and calculated a square root, all while referring to the Periodic Table of the Elements from memory (I really don’t know what he was doing, but he was a super smart person deep in thought… isn’t that the kind of stuff they do?). Then he reached into a magic bag of Sheepdog tricks and pulled out… TA DA!.. our car keys. 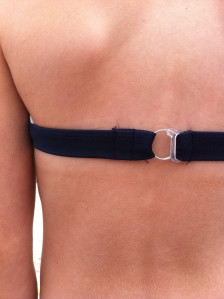 MacGyver has nothing on Sheepdog

In the very little time it took me to erect (heh, heh… I said “erect”) the tent and open a few beach chairs, Sheepdog had repaired Kid C’s bikini top using only a metal key ring. And in doing so he kept his daughter from going topless, at least for one more glorious day.

2 responses to “How Sheepdog Kept His Daughter From Going Topless”